ready to worship Him 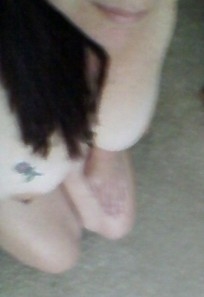 Posted in participation with Sinful Sunday, hosted by Molly's Daily Kiss.
Click below to see who else is having a different kind of religious experience this Sunday.

Why I have a smile on my face today

His response this morning:

Well done my whore. Thank you for the great description.
I love you x
Posted by this girl at 9:10 AM 1 comment:

kneeling and naked
anticipation, time stops
awaiting His voice
Posted by this girl at 11:46 AM No comments: 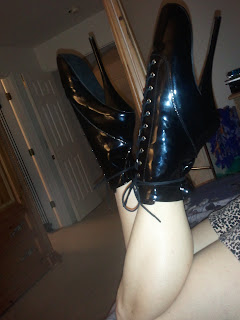 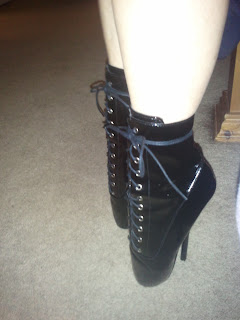 These might be the craziest shoes in my house.  I was able to stand in them for a few seconds, even able to take a couple hasty, tiny steps.  I bet with practice, I could almost walk across a room in them.


Posted in participation with Sinful Sunday, hosted by Molly's Daily Kiss.
Click below to see who else having a sexy Sunday.

The Mighty Power of Words

I want to begin this blog with a little history. Master, you might want to skip a few paragraphs. (Mr.G gets to live in a world where I mostly only exist for him) I just wanted to write and explain (my opinions only, I'm not a doctor, therapist, or counselor) how a verbally abusive (or physical, for that matter) relationship is not and cannot be construed as a D/s relationship.
In my early 20's I dated two bad boys. The first gave me two black eyes and we broke up and I never looked back because that wasn't acceptable in my world. The second character I fell for time and again over a period of three years. He was a much sneakier abuser. The marks he left were all on the inside. He was totally bi-polar and we had a very addictive and toxic relationship. A better way to describe us was I was totally in love with him and depending on the swing of his polarism, I was either his girlfriend who he spoiled with extravagant gifts and gestures or a "dumb bitch" who needs to understand we're just friends and he fucks other people.

I actually had to move out of state to break up with him. I also became a self-help book junkie. I think I read every self-help book published in the late 80s and early 90s. I decided I would never tolerate someone who would hurt me or my feelings merely for sport or depending on his whim or mood. But around this same time in my life, I discovered D/s. And it all made sense, I would attract these type of men (and was attracted to them) because I am a submissive and these jerks I kept being attracted to were certainly Dominants.

So fast forward to now. I've blogged about how Mr.G talks to me before. He's said things to me like shut up, fuck off, and has multiple times hung up on me. Sometimes he's teasing (the fuck off was). Sometimes he just needs me to quit chattering so he can get a word in.  And I'm not going to list the wonderfully wicked nicknames he's called me (crusty is a favorite) or talk about how he teases me about other things that men really don't get to tease women about.

What I want to focus on is the intent and the feelings in me it produces. Say my Master says "you fucking whore". Just typing that, my heart is racing and I feel a bit glow-y (read, sweaty). My throat starts to constrict and a furnace is turned on in my panties. I feel so good, so hot, so much like taking all my clothes off and begging to suck his cock. This is the difference. He says the things to me and teases me evilly because sometimes his sadistic side takes the form of verbal barbs. In the past, never was I called names or teased sometimes relentlessly and didn't feel like I needed to throw up my guard and fight back. I was always ready for a verbal battle of wits. And even if I felt some small victory after exchanging horrible words with my ex, I always felt less than afterward, deflated, diminished.

One of the ways Mr.G shows me he cares is by teasing me. He uses dirty words as foreplay and teasing jest as our own form of long distance spanking. His words of love and genuine care for me pervade even the harshest of words.

So I just wanted to put it out there. I do not condone staying in a relationship that in any way makes the light in your soul shine any dimmer. (I'm so woo-woo today!) And the filthy, degrading and yet wonderful things Mr. G says to me make me feel better than a compliment I've received in the past that wasn't sincere. I know the difference between good dirty words and bad. I feel like I'm so lucky to have learned this lesson. Both ways. The lesson that verbal abuse is still abuse, even if there are no physical marks. And the lesson that someone can speak to me (and hurt me and overpower me) in a way that makes us both feel oh so good afterward.

Labels: abuse versus being called a dirty whore in a loving way

Bad Poetry (only poetry that rhymes is good poetry)

my version of meditating.
instead of clearing my head.
i focus on a single thought.
i am His whore.
i must be patient until next
my mouth and my pussy can be filled
with His cock and His fingers.
and until then, must make do with memories and mental recreations.

These shoes aren't even the craziest shoes in my house. Although, I admit, I could only stand in them for a moment. 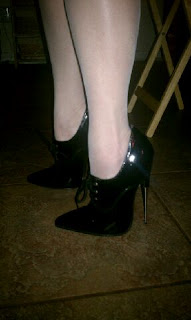 Posted in participation with Sinful Sunday, hosted by Molly's Daily Kiss.
Click below to see who else is on their toes this Sunday.

Ah, memories. My last visit to Master was in December 2011. This was the token of his affection he sent me home with. He decided he wanted my nine hour plane trip to be a bit uncomfortable. I love his marks, though. Even if I sometimes try to crawl off the bed while he's giving them. 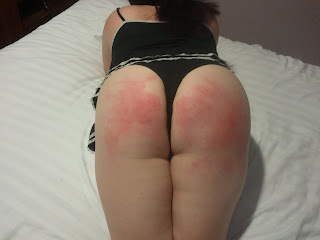 My blog post today is in honor of Davy Jones' passing yesterday. He is the first British guy to make me swoony. My sister and I used to kiss our tv screen during the closing credits of The Monkees. And on the show, the girls would get stars or hearts in their eyes when they'd get all dreamy-eyed over him. (And I'm such a dork. I can't remember what the little cheesy 70's graphic was and I spent at least 20 minutes trying to research this, to no avail.)
But that's exactly how Mr. G still makes me feel, down to my very core. Granted, my first crush really only made me want to kiss (mouths closed) and hold hands a lot. Mr. G makes me want to beg him to do things that even I think “wow, that's fucked up”.
But, for once, I'm not pure filth. I am fighting my preferred lazy writing (to only write pure smut, rubbing one off being the sole pursuit in the reading and writing of it.) This blog isn't the begging to cum, pussy soaking wet and throbbing so hard it's like the beat to a song kind of a feeling I'm trying to describe. This is really more the stars in the eyes feeling.
Thankfully, this is a state that has many levels to it. Most of which, I'm a fairly functional and even efficient human being. There are a few levels of dreaminess that I'm more impaired than if I'd had a painkiller/liquor/sleeping pill cocktail and I wouldn't operate heavy machinery when I'm like this. Most of the time when I'm really star-struck, all I can do is lay on the guest room bed and await any further instruction. Which most of the time is merely “you okay?” and Mr. G laughing at me because he pushed my buttons and I got all foggy and it's funny to poke fun at his girl who's in lala subbieland because he said a few naughty things in a row or spoke to me in his Dom voice.
But the other day. I felt so...dreamy-eyed. T even noticed it and said, “You have that moony look or starry-eyed or whatever you call it” when I hung the phone up after getting to *really* talk to Mr. G for quite some time. And it was so funny because I felt almost drunk with it (with feeling so submissive to my Master) that I went to that cocky, yeah, I know I look goofy with a big grin on my face place. And I didn't even care if I looked stoned. And it was so much more than just the happy after the orgasm. I have felt for days closer to him and more his than I have since I last left his country, crying on the train listening to Adele sing “Someone Like You” while I watched it snow.
Okay, I lied. This is a pussy throbbing my fingers aren't enough but I'm going to cum so hard kind of a blog. So it was confirmed for me that phone sex is, in fact, the best substitute. I'm such an auditory whore, hearing is the next best thing to feeling. Don't get me wrong, I love seeing. I will beg for a skype play until I'm blue in the face. But a proper quick and dirty phone sex session? Holy shit. I'd forgotten what an incredibly gratifying feeling having good phone can produce.
And per usual, when he has me so turned on I am nothing but his squirming needing to cum and wanting to facilitate Master's pleasure sex toy (wrong order!) I can't remember a fucking thing he said. I swear to God. It's like he wipes my memory clean after my orgasm. So I know we've just had amazing phone sex and I know I just had a great orgasm (the appetizer kind, though, where now you need to cum like 14 more times?) but I can't remember a fucking single thing he said to me. I know a few of my favorite makes my knees buckle when I hear them phrases were thrown out there. But beyond that, he could've been reading from a computer parts catalog. I honestly haven't an inkling what he said. And it's truly a cruel joke, considering how much his words affect me.  It's like they're so powerful, they completely erase my memories. Either that or he's got some kind an app for that on his phone...

this girl
I blog, therefore I am.

My most popular posts